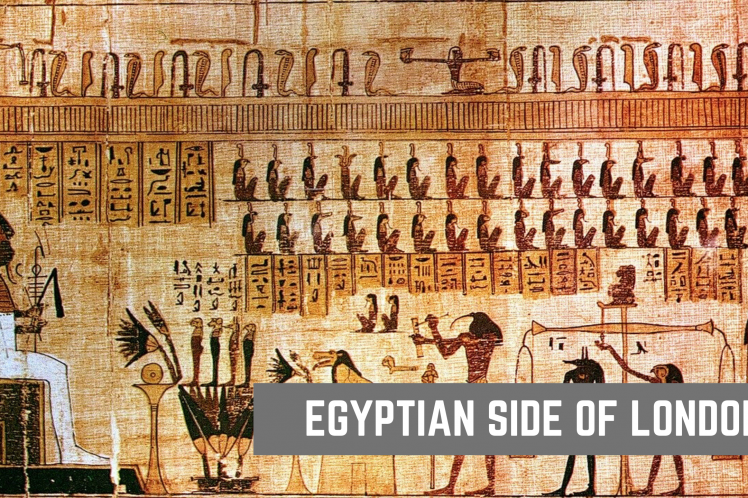 Take a walk around London and discover its Egyptian links – you might be surprised by what you find.

If you are staying in hotel South Kensington, head up the Edgeware Road and around Soho to find Egyptian food and drink, plus plenty of Egyptian restaurants.   One of the most popular is Ahl Cairo based in Marylebone which is a delightfully informal place to find traditional Egyptian fare such as falafel, koshary and tagines.  They will even deliver by Deliveroo if requested! Another popular destination is Koshari Street in St Martin’s Lane which sells authentic street food.

Stop off in Harrods to explore its spectacular Egyptian Hall, before heading over to Kensington to take in the Tutankhamun exhibition at the Saatchi Gallery.  Tutankhamun Treasures of the Golden Pharaoh will be open from now until early May 2020 and offers a superb opportunity to see some spectacular items found in his tomb.  Many of the items on display have never before been seen outside Egypt, so there are definitely some unusual things to find.  There’s plenty of brilliantly coloured jewellery as well as lots and lots of gold.  There are gold-covered bows, gold-covered furniture, fans, even the statues have golden sandals!  The amount of intricate decoration and engraving is amazing, leaving you in awe of the sheer skill of the craftspeople who made these items.

You can have delicious food at Selesa Malaysian restaurant in Kensington and find out the story surrounding the finding of the tomb and how it provoked Tutmania around the world.  Everyone wanted some Egyptian style – whether it was clothing, decoration or even links to films.  That Egyptian influence was most evident in the beautiful Art Deco style which can be seen on countless buildings as you walk around London.  One of the most dramatic pieces of architecture is the former Daily Telegraph building in Fleet Street which is definitely worth a look with its massive columns and ornate decoration.

For more archaeology, head for the Petrie Museum at University College London in Bloomsbury.  Petrie was a well known Victorian archaeologist who spent many years excavating in Egypt. The museum contains his personal collection.

Also, not to be missed is the British Museum with its ever-popular collection of Ancient Egyptian mummies as well as other archaeological finds. End your Egyptian tour down on the Embankment at Westminster.  Walk just a little way along the river bank to find Cleopatra’s Needle – a massive obelisk surrounded by replica Egyptian sphinx.