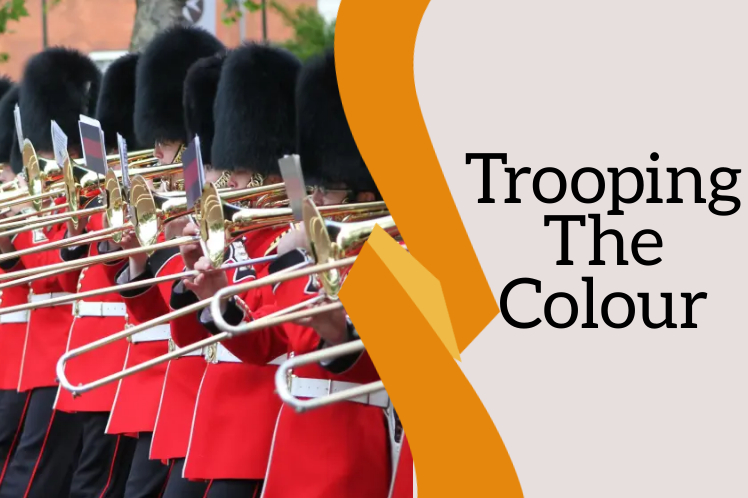 Trooping the Colour is a classically British event which has marked the birthday of the British Monarch for over 260 years. At the parade, there will be more than 1400 soldiers, 200 horses and 400 musicians in a marching band partaking in the event. The show is a display of military splendor, accompanied by musical fanfare to celebrate a momentous occasion in the royal calendar.

Like other royal events, the British public and visitors line the streets to watch the parade, cheering and waving flags throughout the celebration, which finishes with a spectacular RAF fly past by the Red Arrows. Her majesty the Queen will of course be in attendance, and during the show she will greet and inspect the soldiers, before riding in a carriage back to Buckingham Palace and joining her family on the balcony to watch the flypast.

How to Watch the Parade:

For members of the public who want to watch the event, you can find a place to stand either on the Mall or by St. James’ Park overlooking Horse Guards Parade, from where you’ll have the best view. Arrive early as the event is very popular, so it is best to be there by 9am. The RAF flypast can be watched from a number of vantage points, since it is in the air, and you will be able to see it from anywhere around Buckingham Palace and the Mall.

You can also read: The Return of Spring: All About the Chelsea Flower Show

For those who already have seated tickets, formal wear is required at the event, such as morning dress, lounge suits, tie and trousers, and the equivalent for women, who are also encouraged to wear a hat.

Public tickets for seats at the parade are usually allocated by ballot, which closed on March 7th. However, the majority of people choose to watch the parade from viewing points nearby which remains completely free for the public.

Trooping the colour will take place on Thursday 2nd June 2022, which in the UK will be a national holiday to celebrate the Queen’s Jubilee.

The event will begin at 10am and last all morning, with the RAF flypast finishing the show at 1pm.

It is highly recommended to find a place to view the event on the Mall or by St. James’ Park by at least 9:30am to make sure you have the best view.

How to reach the event

The nearest tube stations to the event are Westminster and St. James’ Park, from where it will take around five minutes to walk to the park or Horse Guards Parade. Book a hotel in Kensington for easy access to the celebration, just three stops from St. James’ Park station.

For visitors coming into London via National Rail, Victoria Station and Charing Cross are also only 10 minutes’ walk from the event.

Buses 11, 24, 148 and 211 all stop at St.James’ Park Station and near Whitehall. However, please be aware that some streets are likely to be blocked off to traffic during this event so buses may be diverted.

If you were lucky enough to secure a ticket in advance via ballot, you will be allowed access to Horse Guards Parade to be dropped off by taxi, provided you have a valid pass.

Things to do nearby Westminster is in the heart of the city, so after the parade you will find a variety of activities on offer. Cross over Westminster Bridge to see the newly renovated Big Ben, or walk along bustling Southbank and visit the London Eye. Alternatively head into the West End via Trafalgar Square for some great shopping, entertaining theatre shows and a variety of dining options. If you’re at Buckingham Palace, head west towards Knightsbridge to go shopping at Harrods, or continue on towards Kensington where you’ll find a range of museums such as the V&A, the Science Museum and the Natural History Museum. If you need somewhere to stay for the event, the Park City Grand Plaza Kensington is in the perfect location just a short tube ride from the show