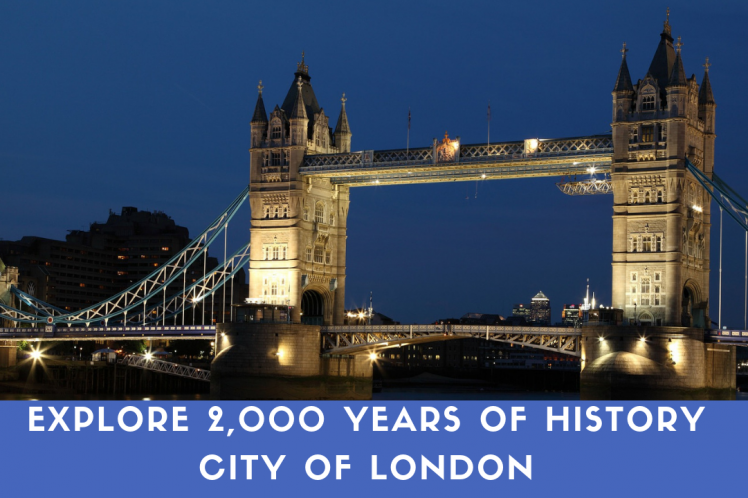 Explore 2,000 years of history in just one square mile - this is the City of London, a very distinct area within what is more generally described as London. It was here that the Romans built the first bridge over the River Thames and founded Londinum.  While the bridge itself has been rebuilt many times, London Bridge is still very much in the same spot as its Roman predecessor.

Only a few minutes walk from London Bridge brings you to The Monument, a strange pillar that stands in a quiet alleyway.  Back in the seventeenth century, this was far from quiet as it was here that the Great Fire of London started.  It began in a baker’s shop in Pudding Lane, and quickly became uncontrollable spreading to neighbouring houses and streets, until it eventually burned down much of the City of London.  The Monument was built in memory of that disastrous event.

Further downstream is the Tower of London, the first stone castle to be built in England. Over the years it has been a royal palace, a fortress, and a prison. Many people have been executed here including two of Henry VIII’s wives.  The Yeoman Warders are a colorful sight in their traditional red and blue uniforms.  The Tower is still a royal palace, although now only home to soldiers and the Crown Jewels.

St Paul’s Cathedral is well worth a visit.  Its iconic dome is recognized world wide, and this cathedral is actually one of the largest in the world.  You can climb up countless stairs and explore the topmost Golden Gallery, offering superb views across London.

Book a stay at Park City Grand Plaza Kensington hotel and stop off in the Museum of London at the Barbican to see displays and items relating to London’s history. Then there is the Bank of London with its museum telling the history of money.  Take a guided walk of around the City of London to discover fascinating stories and secrets of this amazing place.

Fancy doing some shopping? Then head for Cheapside, a street that has been the local shopping area for the City of London for generations.  There have been shops in this area since Roman times, and during the medieval period it was the home of countless goldsmiths selling exquisite jewellery. In addition, the visitors can also have a taste of cuisines of different culture like if they want to have Malaysian food, they can search for best Malaysian restaurants in London which will serve them tasty and delicious flavors of Malaysian cuisine.