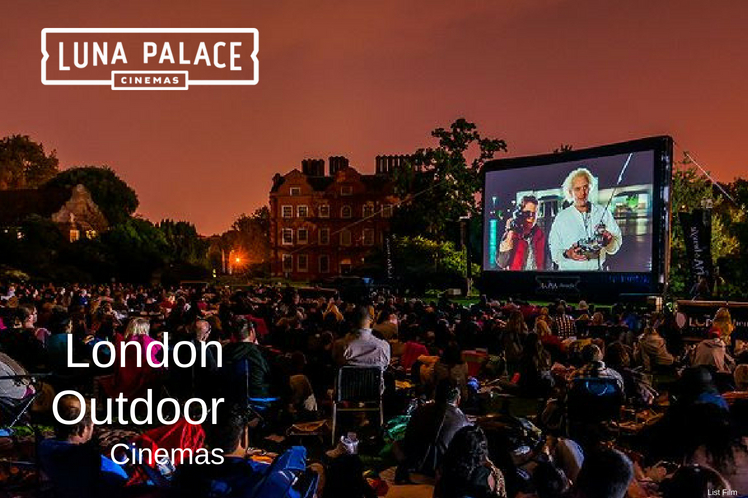 Relax with a film in one of London’s outdoor cinemas this summer – and some are even free! Venues range from rooftops to London parks, spectacular historic sites, and river cruises.  It makes a great way to enjoy an evening’s entertainment.

You can choose between more intimate venues like the Rooftop Cinema Club or large scale screenings in places like Somerset House, Kew Gardens, and London City.  It may be necessary to book in advance, while others are purely drop in. Films on offer vary from night to night, and not all venues will be operating every night so check out websites in advance.

Luna Cinema is one of the most popular outdoor cinema operators.  Locations are definitely atmospheric and different – you could find yourself attending a film within the historic environs of Kensington Palace, Regents Park or Hampton Court Palace as well as Greenwich Park and Tooting Common.  You can bring a picnic or you can also search for the restaurants like Selesa Restaurant Kensington which will serve you delicious and authentic Malaysian food. You can also buy food from the many food stalls available. Films this year include Shaun of the Dead, Dunkirk and Four Weddings and a Funeral.

Film 4 Summer Screenings at Somerset House in the Strand attract over 2,000 participants every night.  Set in the historic courtyard, it is recommended to bring a cushion as the cobbles can be a bit uncomfortable.  But you can enjoy a long night out since although the screening doesn’t start until 9 pm, there is music inspired by the film played by DJ’s from 6 pm onwards.  Films include red carpet premieres and blockbusters.

For something more exclusive, you can book tickets for one of the Movies on the River cruises run by City Cruises. Starting from Tower Pier, you can enjoy a cruise along the River Thames while watching classic films like Ghostbusters, Jaws, and Casablanca.  This really has to be the ultimate river cruise experience!

If rooftops are your preference then search out the Rooftop Cinema Club which has venues in Peckham, Shoreditch, Stratford and Tobacco Dock while being a resident at the Park City Grand Plaza Kensington hotel. Many of the sites offer 360-degree panoramic views across the city, as well as blankets and comfy chairs.  The film menu is varied with titles like Black Panther, Grease, and Raiders of the Lost Ark. Down in Croydon, Lost Format Cinema will be setting up its big screens on top of a car park and offering a variety of films along with DJ’s, bars and street food.

Head down to London Bridge City for its annual Summer by the River programme at The Scoop.  Free movies include Moana, Guardians of the Galaxy, The Greatest Showman and Into the Woods.  It makes a fantastic setting to watch a film as the sun sets over the River Thames.